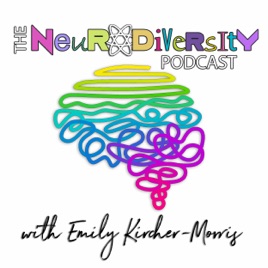 The Neurodiversity Podcast talks with leaders in the fields of psychology, education, and beyond, about positively impacting neurodivergent people. Our goal is to reframe differences that were once considered disabilities or disorders, promote awareness of this unique population, and improve the lives of neurodivergent and high-ability people.

4.8 out of 5
194 reviews
294sjf345 2022/04/27
Game changer
Our young daughter is neurodivergent and we are looking at the path ahead for her while also being present in both tough and joyous moments. This podc...
more
Jill_Rchards 2022/04/08
Fabulous!!
As a parent who has just learned what autism/neurodiversity truly is and is awaiting an autism diagnosis for my 11 year old son, I have been thrilled ...
more
Dr. Sarah Henning 2022/04/07
FABULOUS!!!
I’m a psychologist in private practice with a neurodivergent teen. This podcast is so cutting edge and helpful! I’ve been sharing it with friends and ...
more
PacMan0127 2022/01/21
Outstanding And Much Needed
This podcast has done amazing work in shifting the perspective to focus on the gifts of neurodiversity rather than overly focus on the negatives of ne...
more
ColbyFuller 2021/09/16
Suicide, part three
I just listened to this podcast without realizing what the subject was going to be. My late husband, who was definitely a “2 E” person, but never iden...
more
peoordi 2021/09/16
Love this podcast!!
This was the first podcast I started listening to right after my son was diagnosed. We had no idea where to turn but we were desperate for information...
more
Delci L 2021/02/19
Amazing
Outstanding. I can’t stop listening. So happy to have stumbled upon this. Thank you!!
Humanitarian for Life 2021/09/11
Love the podcast not the interrupting music
I love this podcast. The info shared is so insightful and helpful. However, it drives me nuts to the point of sometimes turning off the episode when r...
more
gadMM 2020/04/22
Game Changer
This podcast is amazing. Not only has it given me a better understanding of my children and how to be a better parent, but it has also given me a bet...
more
Kick the Transplant 2020/04/21
Concentrated on twice exceptional kids
I have listened to 6 of these podcasts. They probably have good info for parents of twice exceptional kids but so far I have found nothing applicable...
more
see all reviews